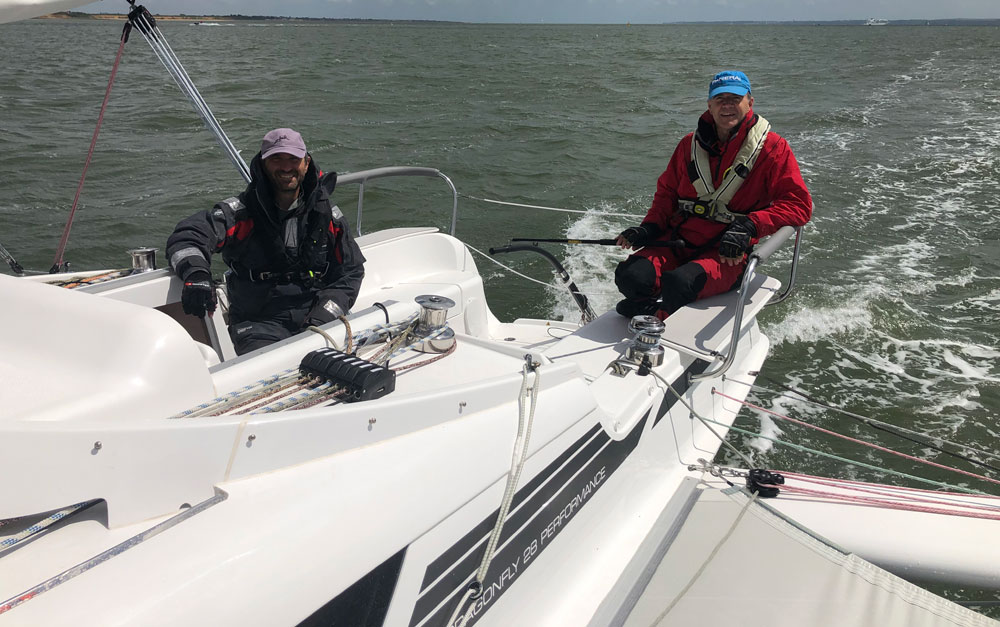 What a fantastic Round the Island Race on Saturday 25 June. Our Dragonfly 28 demonstrator was 10th fastest in a fleet of 1,100 yachts!

Congratulations to all the Dragonfly crews, who made up almost 50% of the multihull class for this fast and exhilarating lap of the Isle of Wight. This year’s Dragonfly fleet included DF 35, DF 32, DF 920, DF 28 and DF 800.

Thanks to Tim and Simon, who sailed our Dragonfly 28 Performance with me (Al Wood). What a great crew.

This year’s Round the Island race saw almost perfect conditions. The start was in 15 knots of breeze, which increased to 20 knots around the back of the island. However the wind was further south than normal, which changed the course after the beat to the Needles.

Therefore we enjoyed an exhilarating 2-sail reach to St Catherines, undoubtedly a highlight of our race. With true wind on the beam but the waves further aft, we were surfing at 15-20knots, and keeping pace with a foiling IMOCA 60 as we both moved forwards through the IRC 0 fleet. The powerful floats of the DF 28 Performance were superb in the waves, riding high and allowing us to really power the boat up on the surfs.

We kept close inshore at St Cats, this southern-most tip of the island, to minimise the foul tide. As we hoisted the Code 0 for the short leg to Ventnor, the IMOCA dropped behind as their 4m+ draft had forced them out into the steep tidal overfalls.

After Dunnose we set the spinnaker and sailed almost direct to Bembridge Ledge buoy. We gybed once and held the spinnaker to Ryde Sands. Finally we turned towards the finish with Code 0 on another fast reach in 15-20 TWS.

Our elapsed time of 5hr 22min was a remarkable 10th fastest overall in a fleet of almost 1,100 yachts. We also classified 2nd in the ‘GP & MOCRA Multihulls’ class on corrected time.

The only monohulls to finish before our Dragonfly 28 were 4 ‘Fast 40+’ Grand Prix racing yachts. We were only 1/2 hour behind ‘Dark & Stormy’, which took monohull line honours with a crew including Olympic medalists, and were the first production cruiser home. What an amazing boat – we sailed home to Hamble Yacht Services, put the sprayhood and cockpit tent back on and its ready to go family cruising.

What a race, thanks to all the team at the Island Sailing Club  who make this annual event so special.