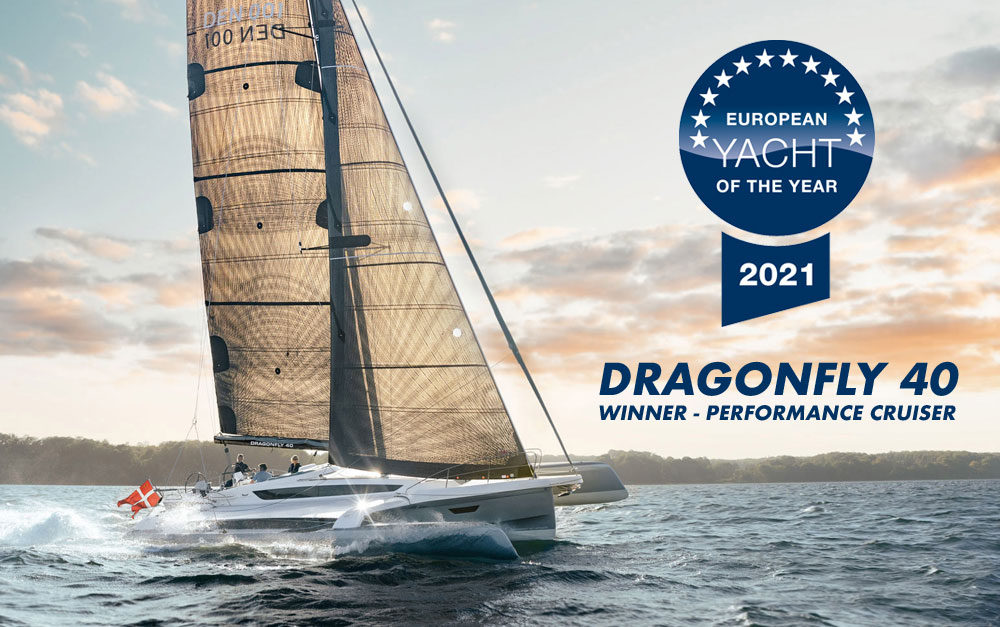 We are very proud to announce that Dragonfly 40 has won the ‘European Yacht of the Year 2021’ title, in the Performance Cruiser category.

The jury commended Dragonfly 40 as “fast, fun, incredibly well built”.  It is also “the new benchmark in performance cruising”.

The European Yacht of the Year jury represent 12 top yachting magazines. Toby Hodges from Yachting World represents the UK. Firstly, each judge nominates their favourite boats of the year. Secondly, the jury invite the short-listed boats to trial events, where the jury all sail them back to back. Finally the jury compare notes, and jointly decide the winner in each category.

2020 was not a normal year, and Covid-19 presented new challenges. However the jury tested more boats than ever this year at 3 trials in Kiel, Cannes and La Rochelle. Remarkably, only 4 of 19 nominees were unable to attend.

The awards are usually announced at a special event on opening night at the Düsseldorf Boot show. However, Covid forced this year’s show to be cancelled, so the awards were moved online. Jochen Rieker of Yacht magazine hosted an online ceremony, from the International Maritime Museum of Hamburg.

This year’s awards were held on Friday, and as a result the whole Dragonfly team could watch via a large screen. Listen to the cheers as the results are announced, after which Jens Quorning gives his reaction.

What a fantastic way to start the year! A great reward for all the hard work the Dragonfly team put into designing and building these unique boats. The quality of nominees is always so strong, and the judging so high that these are referred to as the “boat-building Oscars”.

Jens Quorning needs to clear another space in the trophy cabinet. Remarkably, this is the 4th time his family-run yard has won this title. All of our current range were nominated, and our previous winner was the Dragonfly 25 in 2016.